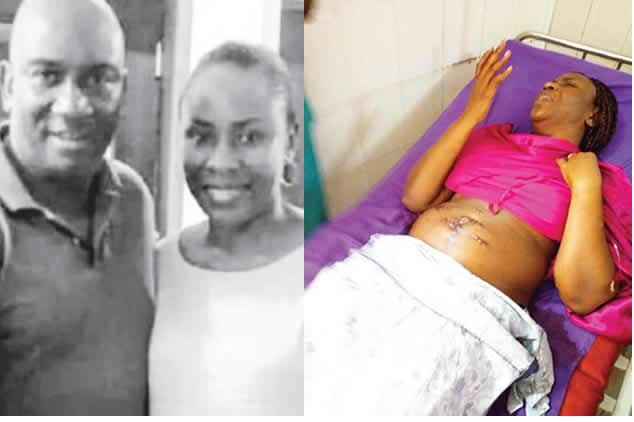 Anyone who advises you, prays for you and helps you to marry a good wife or good husband in this evil generation should be well appreciated. A bad spouse – whether they have money, s*xy body, big br*ast, etc. (the frivolities misguided young people look for today) – will destroy you physically and can also destroy your ETERNITY. Be very careful.

Diamond Estate, Sangotedo, Ajah, Lagos, was in turmoil on Thursday after a lawyer, Udeme Odibi, allegedly stabbed her husband, Otike Odibi, to death. What happened?

The suspect was also said to have cut off the private parts of her husband, who was also a lawyer, and stabbed herself.

Punch gathered that 47-year-old Udeme had threatened to stab her husband on Wednesday over a disagreement that ensued between them.

The 50-year-old was said to have informed a neighbour and his relatives about the threat on the telephone before he went to bed.

The woman allegedly made good her threat in the early hours of Thursday, ripping out the entrails of the victim with a knife.

The Lagos State Police Public Relations Officer, Chike Oti, who confirmed the incident in a statement, said the couple had endured three years of marriage fraught with domestic violence.

He said the couple did not have any child together, although Otike had a daughter in his previous marriage.

Oti, a Superintendent of Police, stated that a distress call was put across to the Divisional Police Officer, Ogombo division, around 7.30am as regards the murder.

He said, “Based on the information, the DPO mobilised a team of detectives to the scene where they found the man lying on the bed in a pool of blood with his stomach ripped open, exposing his intestines. As if that was not enough, the killer severed his genitals and placed them on his right hand.

“However, before the arrival of the police, Mrs. Udeme, who had unsuccessfully attempted to commit suicide after allegedly killing her husband, was rushed to a hospital for treatment by neighbours.”

The PPRO said the state Commissioner of Police, Edgal Imohimi, directed detectives from the homicide section of the State Criminal Investigation and Intelligence Department, Yaba, as well as forensic experts to the scene of the crime for investigation.

“An eyewitness account revealed that the couple, both of whom are lawyers, married three years ago after the deceased divorced his first wife. The deceased’s first marriage produced a daughter currently schooling in the United Kingdom. However, his second marriage is said to be without a child,” he added.

The police spokesperson stated further that information from a neighbour showed that the deceased had called him (the neighbour) a few hours before he was murdered, complaining that the wife was threatening to kill him with a knife.

He said the neighbour, however, warned him to be careful.

“The deceased also called his mother and his younger sister complaining of threat to his life that night,” Oti added.